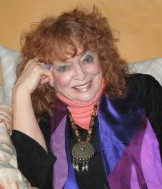 "Art brings a uniqueness to a space

whether it's a public place or a home.

The presence of art speaks of humanity.

It personalizes even the coldest space

and above all it is a subliminal message

to the casual passerby of the

imagination and possibility of the

From "Why we need art everywhere"

This has been the mantra of Helen Webber since she began her career in the 1970’s creating hundreds of art works for public spaces throughout the United states and abroad.

It was her strongly held belief that art can touch the spirit of many more people than those whose art experiences are limited to the halls and walls of museums and galleries.

Her bold and richly hued art works executed in a wide variety of media, such as tapestry, glass, metal wood and clay have been installed in universities, corporations, medical facilities, cruise ships, hotels, religious spaces, community and civic  centers and even in a train station.

Over the years many architects and interior designers have collaborated with Helen Webber finding that her work enhanced their designed environments,

giving her the opportunity to create art for well known corporations as well as multitudes of residences.

Working with all sorts of committees, and many different individuals from all walks of life, Helen has met the challenge of integrating her personal creative vision with the ideas and values of a broader community.

“From mermaids to manual laborers, and everything in between:  Each new project leads me down a new path. And that is exciting”

It is the tapestries that she is best known for, and it is this medium that dominates the largest body of her work, which was first introduced to the design world in the mid 1970's.

The tapestries utilize a collage technique combining an array of designer upholstery fabrics such as velvets, brocades, worsteds, jacquards, mohair, hand woven woolens, among many others. Yarns of all kinds are integrated into the tapestries surrounding the edges of each fabric piece.

This particular technique, which is unique to Helen Webber, allows for dramatic large scale works which have ranged from 6 feet to 65 feet.

Some examples, are two double sided sixty five foot long tapestries created for a cruise ship, or the 4 eighteen foot long  tapestries hanging in a civic center in California.

For her limited edition tapestries, Helen has created over 200 designs, with themes that range from expressions of nature to the celebration of the spirit of children. Her collections are:

Because the editions are produced as they are ordered, they allow for modification in size and color to suit specific spaces. One 3’ x 4’ edition tapestry became 12’ x 16’, hanging in the atrium of a medical building.

Translating the art into giclee prints

Some of the limited editions have been translated into fine art archival prints replicating with startling accuracy both the textures and the colors.

The print collection has expanded to include 26 watercolors giclees, as well as a collection of colored Botanical drawings.

Branching out to new media

Some clients, who saw that Webber’s particular art style could be expressed in a variety of media, offered her commissions in stained and etched glass, wood collage, sculpted tile, cast stone, and painted metal.

Some of the work in these media are initially fabricated in other artisan’s studio under Helen’s supervision, and brought to her studio for final finishing work. However the tapestries, clay tiles, and stone castings have been completely fabricated in Helen’s studio..

Words and images: a great duet

A body of work in painting and drawings  reveals Helen Webber’s penchant for combining words with her visuals. She states that she uses the words not only for their meaning but also for the graphic effect.

The art speaks of personal themes and also includes more public concerns  such as world peace, and humans as the endangered species.

FROM BEDS TO BOOKS

Expanding  and flourishing: art beyond the studio

During her career she has lectured and taught at colleges and organizations across the US to encourage artists to enhance their creative spirits and flourish in the world out side of their studios. She gave lectures and talks from California to Paris, and has been an instructor at the California College of the Arts, as well as Hussian Art College in Philadelphia.

She co-founded Women in Design International to help make women’s talents more visible in the design world and the world at large.

The educational process started when she was in 4th grade and attended an after-school art class sponsored by the WPA. Then to New York’s Little Red School House, followed by Music and Art High School and a BA in Psychology from Queens College, followed by studies in social group work at Columbia University... then receiving a Masters Degree from the Rhode Island School of Design.

CATCH A DREAMER: A BIG FULFILLMENT

A film and a book about children’s rights

Earlier in her career Helen created a suite of ten tapestries that celebrated the spirit of the child, inspired by the United Nation’s declaration of the Rights of the Child. These remain in her collection as limited editions.

This theme later inspired the basis for both the book and the film, entitled CATCH A DREAMER.

The book, created first, is a collaboration with Jim Petersen who wrote words to accompany the images. The film was created from a long held dream Helen had of integrating her art into film, and melding it with music and narration.

In 2009 a 64 page book and a 26 minute film emerged. Both are moving expressions of the dire conditions of millions of children around the world.

But they also bring a powerful shout for the possibility of change.

“That fact art can reach into peoples hearts and be an influence for social justice is one that I have embraced for most of my life. These two projects, the book and the film, fulfill my deepest wish to express something significant in our world that might in its own small way affect positive change.”